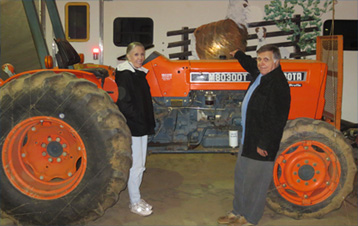 Jack and Tracy Pearson haven’t always been in the llama business. In 1968, Jack started out owning two auto parts stores in the suburbs of Cleveland, Ohio while Tracy designed and decorated for her family’s business. In 1978, Jack and Tracy moved to Atlanta to start over. There, they started a chain of thrift stores (Value Village) that have grown and are still growing and successful to this day.

In 1986, Tracy was working at one of our stores in Atlanta when we bought our first llamas," Jack said. "The next workday, she went in, gathered her things at the store and walked out into another world, without glancing back."

It took five years to clear and cultivate the 98 acres of pasture land and seven and a half acre pond on the Pearson property. During these years, Tracy and Jack attended llama conferences and traveled to many ranches throughout the United States to gather information on the care and raising of llamas. "Luckily, llama ranchers are very generous with their information and advice, and the llama conferences are well worth every penny," Tracy said.

The Pearson’s have approximately 120 llamas on the farm today. The facilities at Pearson Pond Llamas include five large barns and each has a different layout. Each barn is specific to the needs of the llamas that occupy it. Our male barn has separate stalls and we use a very fine, tiny gravel for bedding in the summer because it is cool and comfortable and helps keep the nails trimmed down on the herdsires. In the winter, they have heavy straw bedding. Each stall has an outside run and all the herdsires are released into surrounding pastures during the day.

Jack and Tracy believe in continuous upgrading of Person's herd, which is one reason they have 20+ different herdsires. They are firmly committed to breeding the finest llamas they possibly can, with the soundest health and conformation they can possibly achieve.

In addition to the traditional llamas and the silky llamas, they  are developing suri llamas. Their suri herd represents a variety of suri lines, plus many we have developed here at Pearson Pond Ranch. They have over 200 llamas that represent the finest bloodlines available, including Argentine, Chilean, Bolivian, Australian, Canadian, Peruvian and North Americans. The Pearson’s not only have llamas, they also have chickens, guineas, and peacocks.

The Pearson’s have been friends and customers with Mason Tractor Company since the 1980’s. If you want to see more about Pearson’s Llama Farm, Please visit www.pearsonpond.com 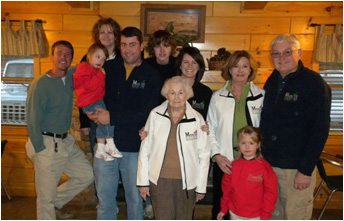 In 1943, Bill Mercier bought 32 acres of apple trees that Dr. C. G. Lloyd, a Blue Ridge pharmacist had planted in 1925. The apple varieties at that time were primarily Red Delicious and Winesap on 25 year old seedling trees. Patriarch Bill steadily enlarged the orchard and later in 1972 brought Tim into the business when he returned home from the Army. Now we have more than 200 acres in fruit, with approximately 45 different apple varieties. We have more acreage in agriculture, with additional apple varieties planted but not yet bearing fruit. “The North Georgia Mountains provide four basic ingredients needed for the successful cultivation of apple trees and apples,” Tim explains. “Those are warm days; cool nights, plenty of sunshine and plenty of moisture.” For that reason, an abundance of apples are grown annually in our orchard. We started growing blueberries as a second fruit, afterward our peach orchard was introduced in the late 70’s. We also raise blackberries, nectarines, plums, cherries, grapes and strawberries. In 2010 we are planning several U-Pick events in addition to our Apple U-Pick. We will start with strawberries then cherries and on to our other fruits. Mercier’s expansion of the retail store started in the early 1970’s with jelly, jams and preserves. We then added our bakery in 1987/88, making apple cider donuts. In 1990/91 we added our world famous fried apple pies. The retail store continues to grow, most recently by adding private vendors within the store which includes Mountain Blooms Flowers and Gifts, Wrapsody In Blue Home Décor, Adele’s Kitchen/Dining and Home Décor and Sugar Creek Market selling toys and John Deere items.

You may visit Mercier Orchards on the web at www.mercier-orchards.com.