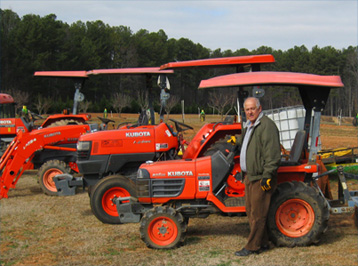 Chef Antonio migrated from Cuba in 1962 in search of freedom and the American dream. He started from the bottom of the restaurant ladder and began working at restaurants in West Palm Beach at Wolfie’s and soon went north to New York City, and Long Island. There he found his true passion of baking & cooking Italian food, in places such as Gurney’s Inn and Angelo’s on Mulberry Street in Little Italy in New York City. He rose rapidly through the apprentice system and quickly became a master baker and chef.  Through his hard work, he helped bring his entire family to the United States to pursue the American dream. On vacation, Antonio fell in love with Atlanta, Georgia & soon migrated south to open his first Italian restaurant, Alfredo’s, in 1974. Other restaurants that followed were Avanti’s, Toni’s Casa Napoli, Antonio’s Bakery, Tony’s Farmers Market, and now Casa Nuova. He met Maria in 1987 and together they have been a very successful restaurant team. Maria also a native of Cuba came to the U.S.A. in 1966, also from a restaurant family, Marias father, Chef Jose Llanes and Maria’s mother Lluminada were restaurant owners in Chicago, Illinois. Their family migrated south in 1984, soon to meet Antonio three years later. They have been customers of Mason Tractor since 2006.  The Kubota and Bandit equipment they have purchased from Mason Tractor play a huge role with their restaurant business. The equipment helps maintain and grow the crops used in there restaurant. 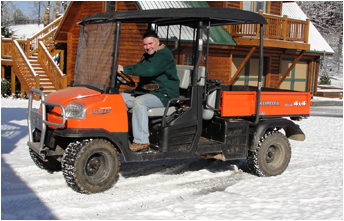 Our customer spot light is on a “gentleman farmer” living in Dawsonville, Georgia who enjoys working outdoor and wants to have the equipment (some call them toys) to enjoy it right. Mike Thomas and his wife, Sue, moved to the Dawsonville area in 1999 after living in Roswell, Georgia for 15 years. Mike and Sue love to play tennis and spend time outdoors, especially by the pond during the warmer months, but continue playing tennis throughout the winter, even during the recent very cold spell. Mike is a Mechanical Engineer by trade and is heavily involved in the power generation industry where he investigates major failures of the equipment. Mike and Sue bought the small horse farm in Dawsonville in 1998 as a weekend getaway, but after some months of making the trip from Roswell to Dawsonville on many weekends, they decided to make it a permanent residence.

Starting out with a Kubota BX tractor and deck, Mike later traded up from a Massey to a Kubota L4330 tractor with the associated bucket, forks and box blade, eventually added a Kubota ZD331 zero radius mower and has recently added a Kubota RTV 1140, partially because of his particular love for the power steering and hydraulic dump bed on the unit. If you ask him what he farms, he will freely admit that he cannot grow anything and leaves the gardening up to Sue. However, he loves to start the weekend on his Kubota ZD mower in the pasture or the tractor in the woods because, as he says, “it is something I can do without a phone, fax, email, Blackberry or computer” with results that enhance the beauty of their small farm.