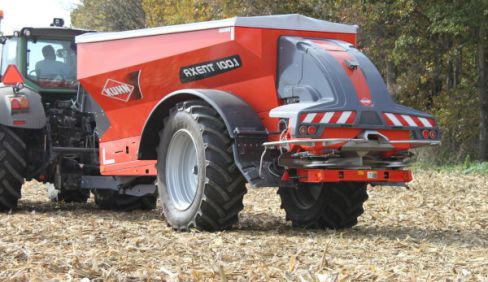 The KUHN Axent™ 100.1 trailed fertilizer spreader is the ultimate large-acreage dry fertilizer and lime applicator. Innovative technologies including EMC rate control, Opti-Point, and Vari-Spread create an industry-unique combination of high capacity and high precision that saves fertilizer and offers outstanding return on investment. Wide working widths reduce the number of passes required in each field, lowering fuel consumption and preserving soil structure. ISOBUS compatibility makes all of this capability easy to use and integrate into your operation. - Less

Fields with asterisks* are required. Please email our helpful staff with any questions or comments using the contact form.

Send to a friend »

Send To A Friend

Fields with asterisks* are required. Your friend will receive an email that contains a reference to this page. Please send this email only to people you know who would be interested in this information.

Operators are able to spread fertilizer with high precision, up to 164’ depending on the material. Wider working widths mean fewer passes in a given field, saving you valuable time and fuel.

Electronic Mass Flow Control (EMC) is a unique technology, well-established and proven after years of experience. The patented torque-based system measures and continuously adjusts the application rate on each disc separately for complete flexibility and high precision.

The Vari-Spread system saves fertilizer by shutting off sections in point rows and oddly shaped fields. In manual mode, four sections per side are selectable (eight total). In automatic GPS mode, the system adjusts the drop point and disc speed constantly, resulting in a continuously variable spread width. Opti-Point takes the guesswork out of headland turns, starting or stopping the discs at just the right moment to reduce overlap.

TWO MACHINES IN ONE

The Lime PowerPack allows for accurate spreading of ag lime as well some organic material. The lime pack contains larger and heavier spinning discs to spread the heavy and wet material up to 60’. The Lime PowerPack can be used for variable rate application as standard.

Premium Features Built Into Every Machine

The thick (8 mm) and wide (31 ½”) endless belt is made of a special high-endurance material. The belt is mounted at a slight angle for better weight balance with the tractor and more steady supply to the PowerPacks in the rear.

For increased operator comfort and faster loading, the hopper cover is hydraulically opened and closed from the cab. Coupled with the standard weigh scales to keep track of how much material remains in the hopper, you can see shorter refilling times and subsequently less fatigue.

Hopper protective guards are used with the Axis® PowerPack to help prevent foreign material from damaging the belt or other components. They can be removed quickly for lime spreading with the quick-lock system. The main hopper agitator allows for sticky clumps of fertilizer or lime to be broken apart for more uniform spreading.