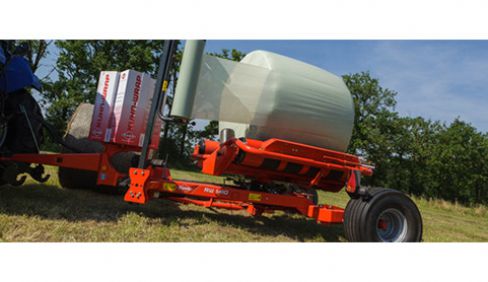 PRINT
Get a Quote »

Fields with asterisks* are required. Please email our helpful staff with any questions or comments using the contact form.

Send to a friend »

Send To A Friend

Fields with asterisks* are required. Your friend will receive an email that contains a reference to this page. Please send this email only to people you know who would be interested in this information.

The mid-range Kuhn RW 1410 is the most versatile trailed round bale wrapper. The manual version (M) is controlled with three cable levers and comes standard with a bale and wrap counter and autostop. The computer controlled version (C) uses a monitor with an integrated joystick that provides all the information and possibilities for automatic operation of the entire wrapping process.

The RW 1410 will lift bales up to 5’ in diameter and 2,200 pounds due to its unique low-profile chassis design with wide-track wheels. The new design of the RW 1410 has a wrapping table with four belts, stronger frame and high grip film cutter for optimal results. Options available on the RW 1410 model are a bale turner, allowing the bale to be discharged on to its flat end, RF remote control and a film-roll holder for four rolls. The RW 1410 can also be equipped with the innovative patented e-Twin pre-stretcher.